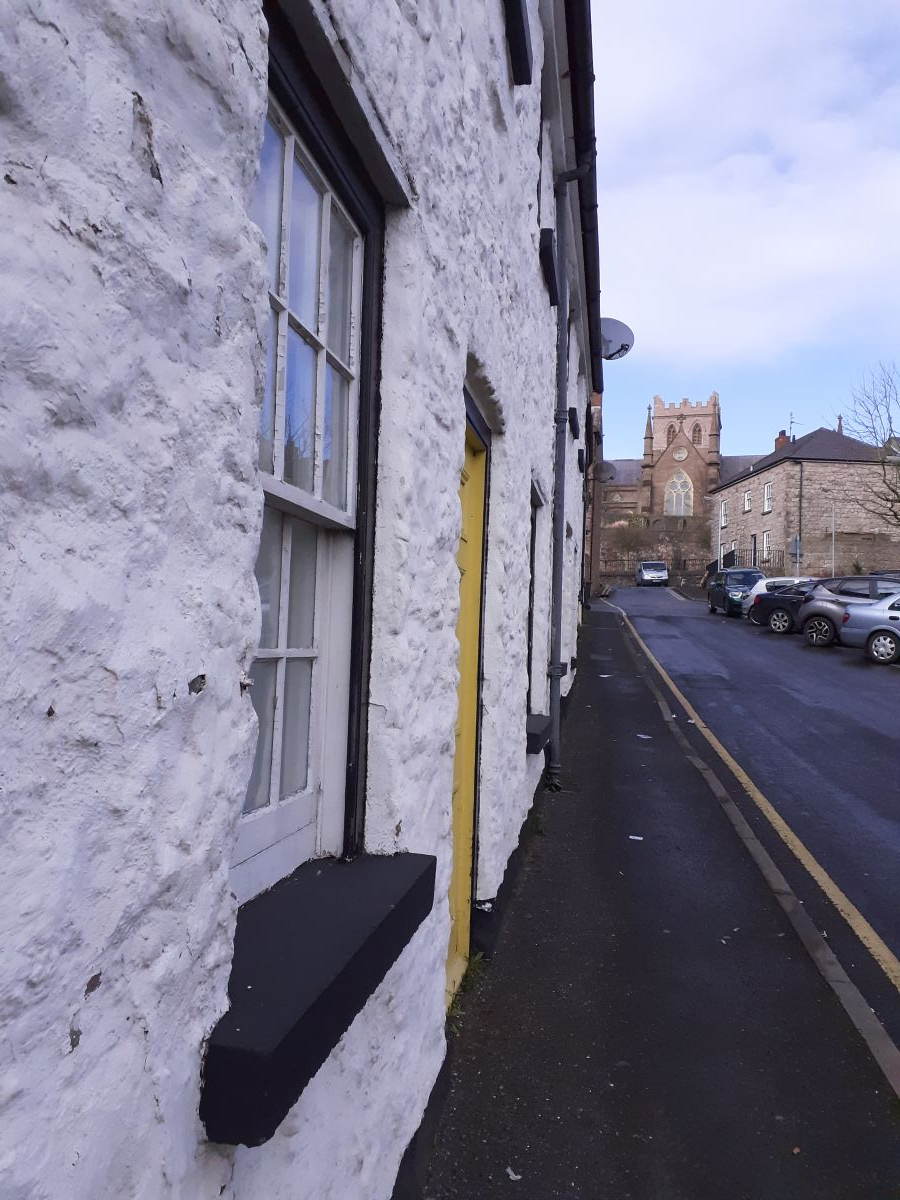 Heard about the monkey and the stone mason dispute in Armagh City?

Take a stroll out with Barbara, a local long standing Tour Guide for Armagh City, and enjoy the quirky fun history of the old City of Armagh.

Share the fun with your friends/family/Club on this 2 hr walk.

Tour starts and finishes at the Charlemont Arms Hotel (Ulsterbus Station at rear entrance)  where you get to enjoy a complimentary glass of locally crafted Cider www.macivors.com
(Full Audio System available on request)

Call Barbara on 07740 511442 or This email address is being protected from spambots. You need JavaScript enabled to view it. to book or discuss.
ALL COVID 19 REGULATIONS AT DATE OF TOUR WILL APPLY

Check out my very own photo snaps of some of the place I have taken visitors in 2019.   Some are a bit out of focus - proof they are my very own snaps!

You can see I obviously enjoy the great outdoors, animals, wild flowers, activities and home cooking. Just can't wait to share these places and more with you when you are ready to visit Ireland/Northern Ireland.

NUADA OF THE SILVER ARM

Along my way with visitors to this land I am often drawn to sharing its myths and legends. History on its own is boring and incomplete without also capturing the culture of early life on this land.  To me it allows the curious visitor to embrace more about our present culture and how it is shaped by our past!

Lost without the opportunity to visit, chat and explore more about our land at present I have written down the legend of Nuada which today holds links to the ancient City of Armagh.  When the time is right take a visit to the hilltop Anglican Saint Patrick's Cathedral in Armagh City and there you will find the strange stone figure of "Nuada".

According to legend, Nuada was King of the Tuatha Dé Dannan before they came to Ireland.

A skilled hunter and fighter, Nuada led his people into Ireland from the north.  He set up the court at Tara and ruled the Tuatha Dé Dannan fairly.

At that time, the once-mighty Fir Bolg and the monstrous Fomorians ruled over most of the Island but the cunning Nuada had a plan to conquer them both. 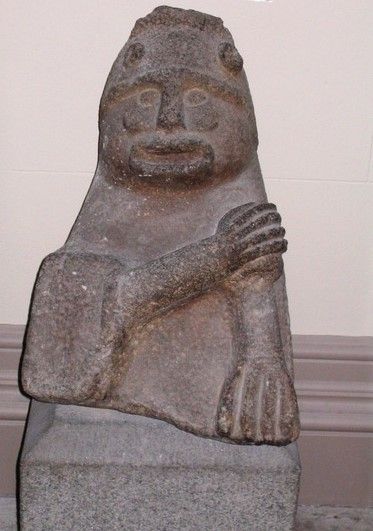 In this fight Nuada lost a hand.  Being physically imperfect he was no longer elgible for kingship so he abdicated in favour of the half-Formorian Bres.

Unfortunately Bres allow the Formorians to take control of Ireland.

The Tuatha Dé Dannan crafted a silver hand for Nuada so he could reclaim his place as king.

Nuada held the throne for another twenty years until Bres returned with a Fomorian army to take power by force.  This time the powerful warrior Lugh led the Tuatha Dé Dannan to victory in a battle that secured their power and took the throne after which Nuada was killed.

The Tuatha Dé Dannan are often interpreted as a representation of the first Celtic invaders of Ireland.  The Fir Bolg were earlier inhabitants, while the Fomorians were subsequent invaders who sought to claim the Island as well.

Nuada may be partially rooted in Irish history, but he also possibly originated from Germanic religion before it was brought to Ireland.  Similar figures in Britain, Wales and Scandinavia show Nuada's arrival from outside of Ireland is both factual and legendary.

Would love to hear your story on Nuada from your part of the world.

THE LONG LOANIN'S OF KILMORE 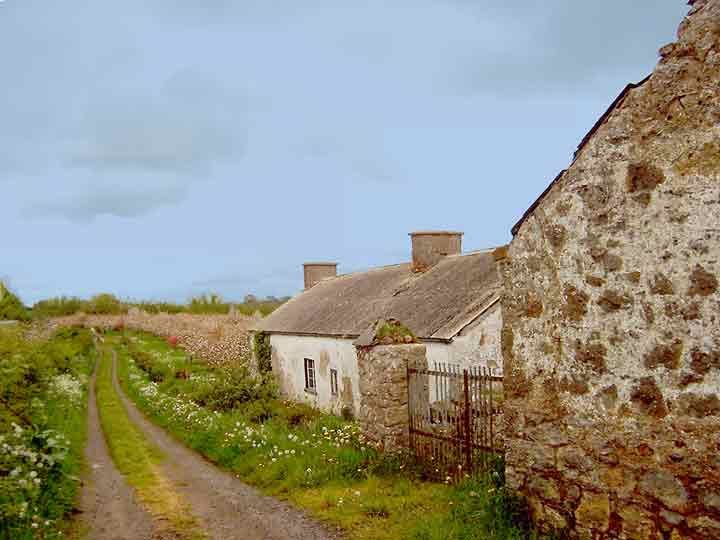 You say Armagh, and I see the hill
with the two tall spires or the square low tower;
the faith of Patrick is with us still;
his blessing falls in a moonlight hour,
when the apple orchards are all in flower.
(Poet   John Hewitt)

Just about 5 miles outside the ancient City of Armagh, perched on a low hilltop sits the crossroads of Kilmore. 20th Century Irish Poet John Hewitt wrote about walking the lanes of Kilmore when visiting his grandmother here. A fertile land once a monastic settlement of the Culdees. During the apple blossom season in early May these rolling hills are awash with the hues of pink apple blossom. A guided walk through the twisty lanes of this ancient landscape will not only allow you to enjoy the beauty of the apple blossom but learn a lot about life past and present in this ancient settlement.
Approx 4 mile round walk. 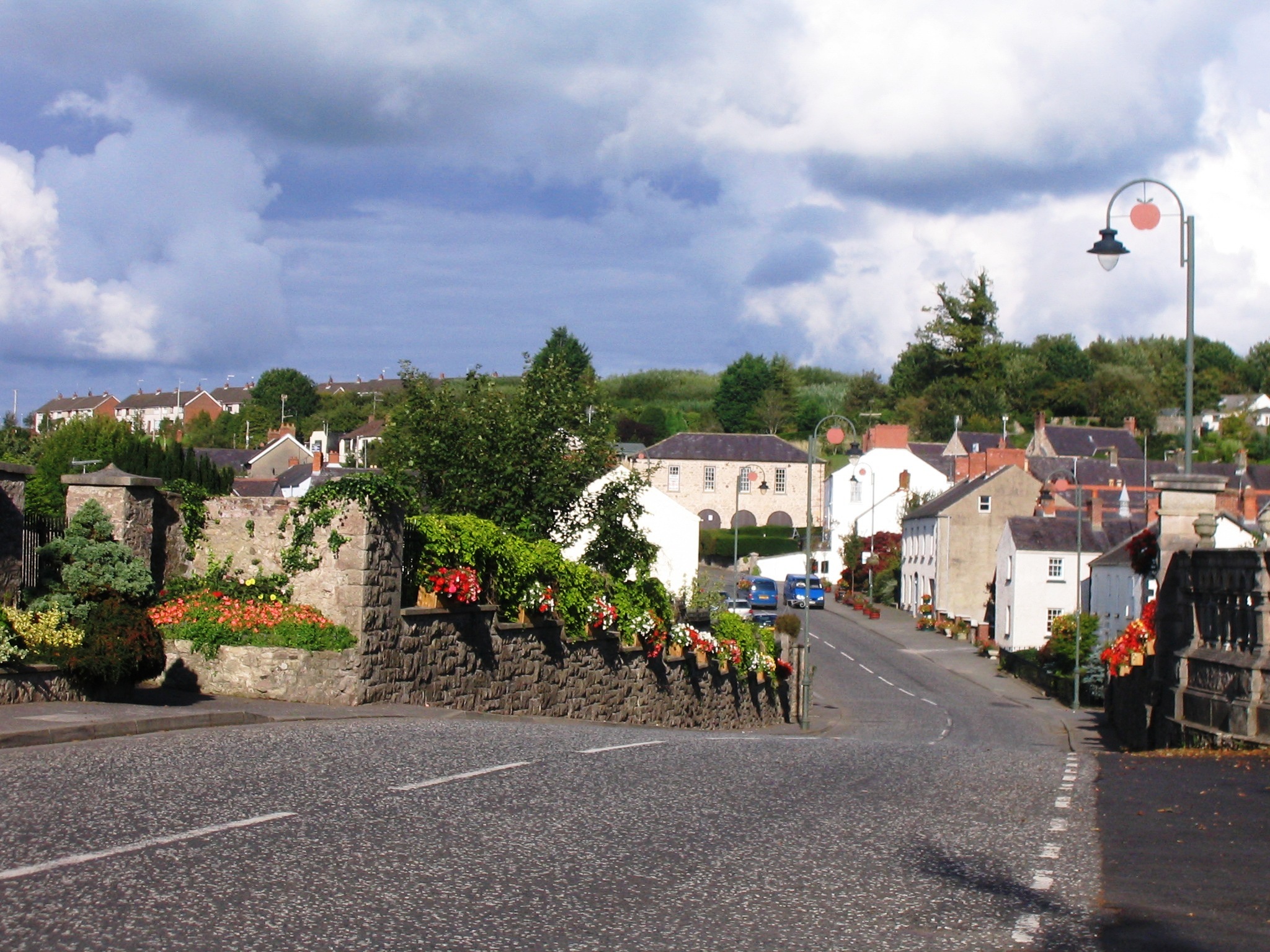 Step out in the pretty Conservation Village of Loughgall and enjoy an interesting walk through its historical past. Today the grand entrance and leafy driveway to the Copes Manor House is quite the landmark of the village. The well known 18thC poet Jonathan Swift spent a lot of time with the Copes when in need of a break from Dublin. Leave the village behind and take to the lanes nearby to enjoy the panoramic views over the orchards. Identify the timeline of the apple tree as you guess the ages of the various orchards in view.
Approx 4 mile round walk. 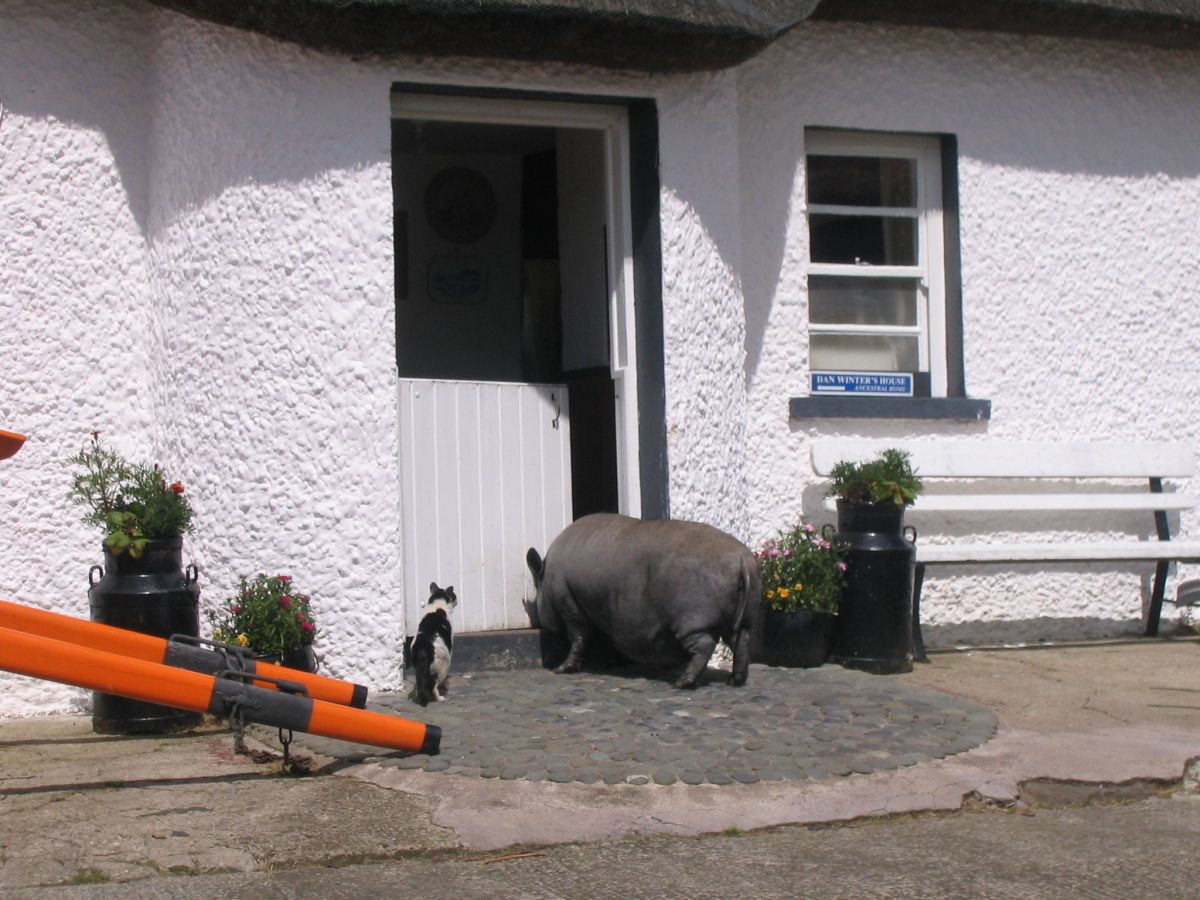 On the outskirts of Loughgall village tucked back in its farmyard sits Dan Winter’s Cottage. Take a step back in time and hear all about Dan Winter and this amazing traditional weaver’s thatched cottage. Leave the cottage behind and walk the steep hill known as The Diamond Hill only to discover more history and numerous orchards in blossom in sight.
Approx 4 mile round walk.

DOWN ON THE FARM WITH BARBARA IN COUNTY ARMAGH 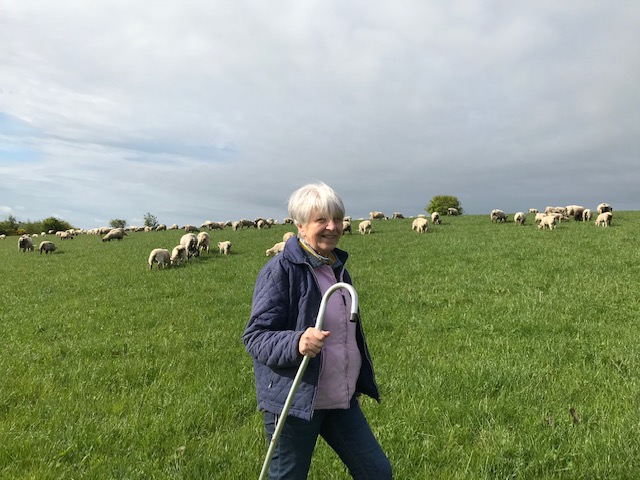 DOWN ON THE FARM WITH BARBARA IN COUNTY ARMAGH

Well Thursday is the 1st April 2021 and I am delighted to say that life here in Northern Ireland is gladly returning to normal.  Living on a working farm my main distraction throughout Covid 19 has been the annual lambing season.  Little did I know that in March 2020 I would continue to work on the farm and help with lambing 2021!

Working with new birth brings me close to nature and helps to distract from the unsettling world news.  All lambs are born now and out in fields.  Looking forward to enjoying their new life skip, hop and jump down by the river banks at dusk.  It truly is a refreshing picture.

Hope you are all keeping well.  Ah well no St Patrick's Day Walking Tours for me  or you this year again but I am busy working on great family/group outdoor activities for us all to enjoy hopefully during this summer ahead.

We all need the tonic of wildness! Time to discover more about what is on our doorstep with a flavour of adventure.

Took my walk out today (Tue 16 March) around the ancient "hills of Armagh City".  Amazing what you can see and learn from the views of a good hilltop...........and only the locals know the best places to go!

Here's to a good St Patrick's Day however you get to spend it.  Sure we can always stomp around St Patrick's Chosen City - Armagh any day of the year!

When the Yanks rolled into County Armagh 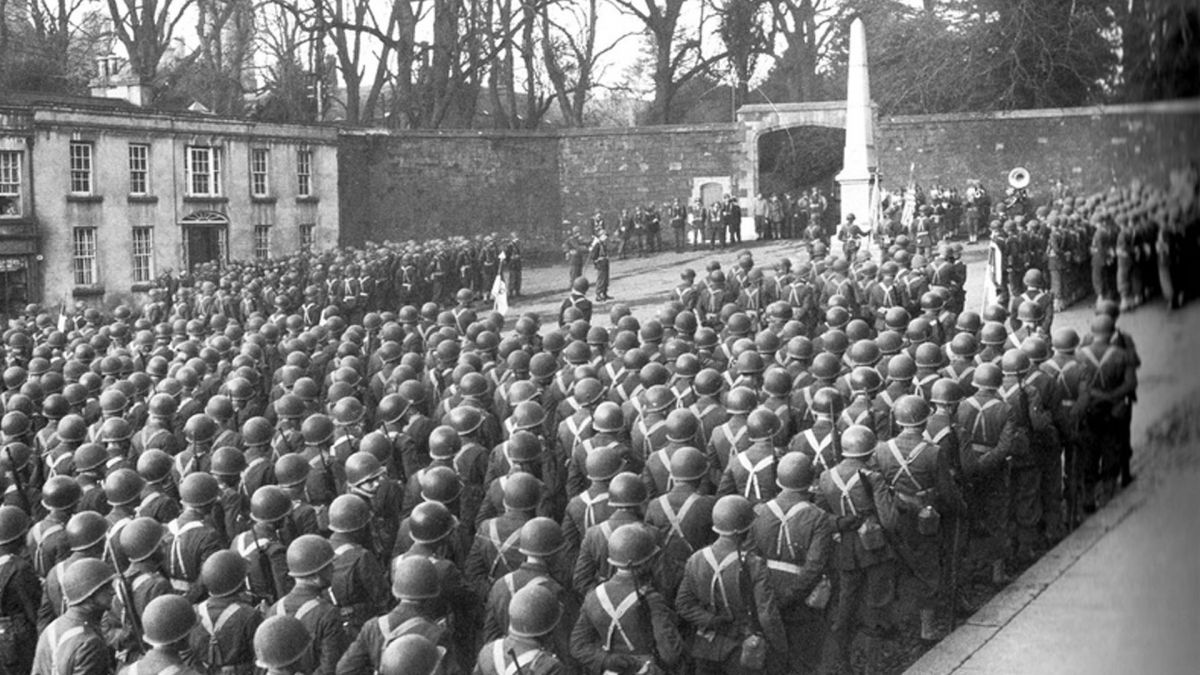 First stop Brownlow House, Lurgan where they set up the Headquarters for the US Army and plans for secret operations were drawn up.

Today an excellent WW2 Exhibition with video footage open to the general public is situated in the magnificently restored 19th Brownlow House. 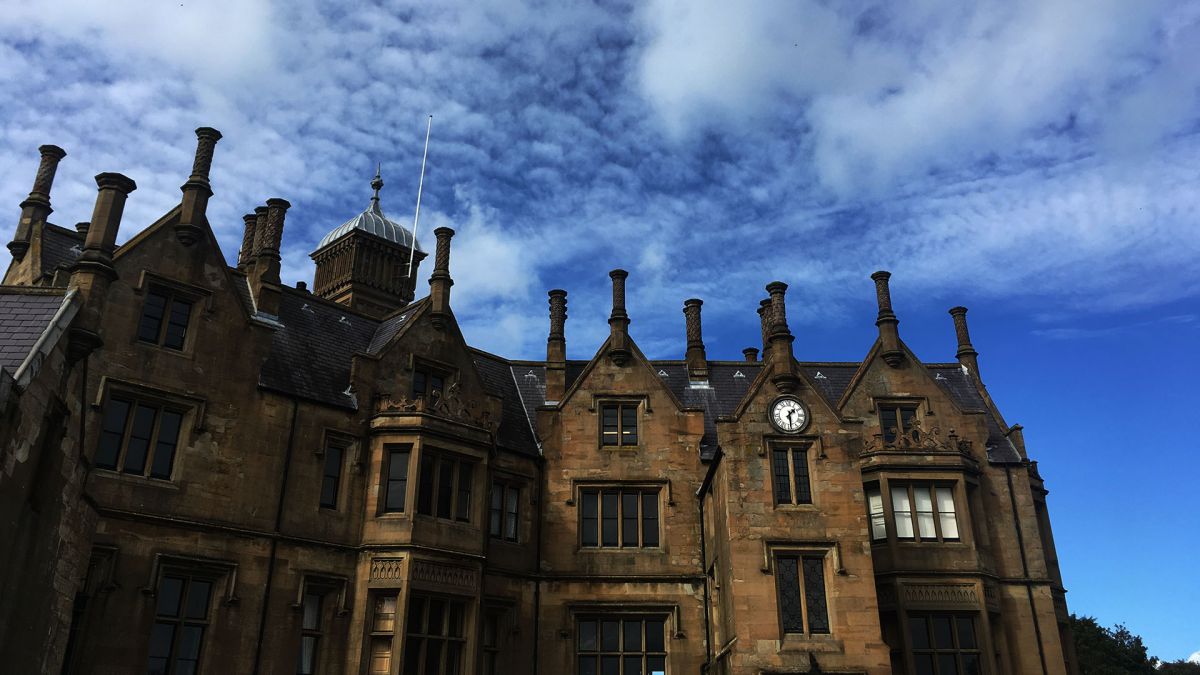 The story starts with Sam McGredy (the first) (late 19thC) and his passion for pansies. To fulfil his dreams he moved from Southern Ireland to a small plot in the townland of Garvaghy, Portadown, County Armagh, Northern Ireland. 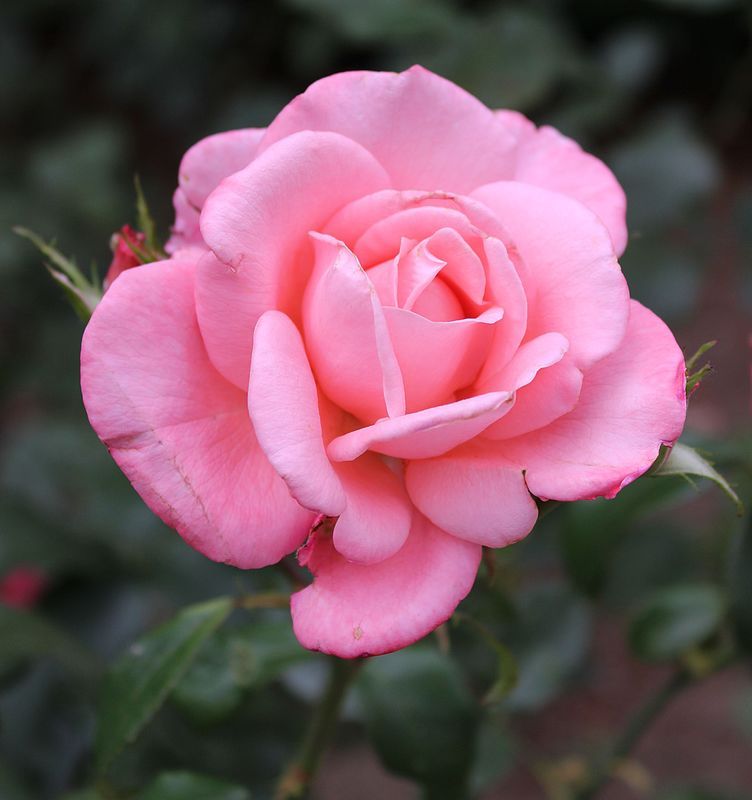 “May you live All the days of your life.” - Jonathan Swift

Hello 2021 and Northern Ireland is once again in Covid19 “lockdown” so my car is parked and its back to long walks in my local park.
I’m lucky as Gosford Forest Park (240 acres) is just one mile from my farm here in County Armagh on the outskirts of the small historical Plantation Town of Markethill. 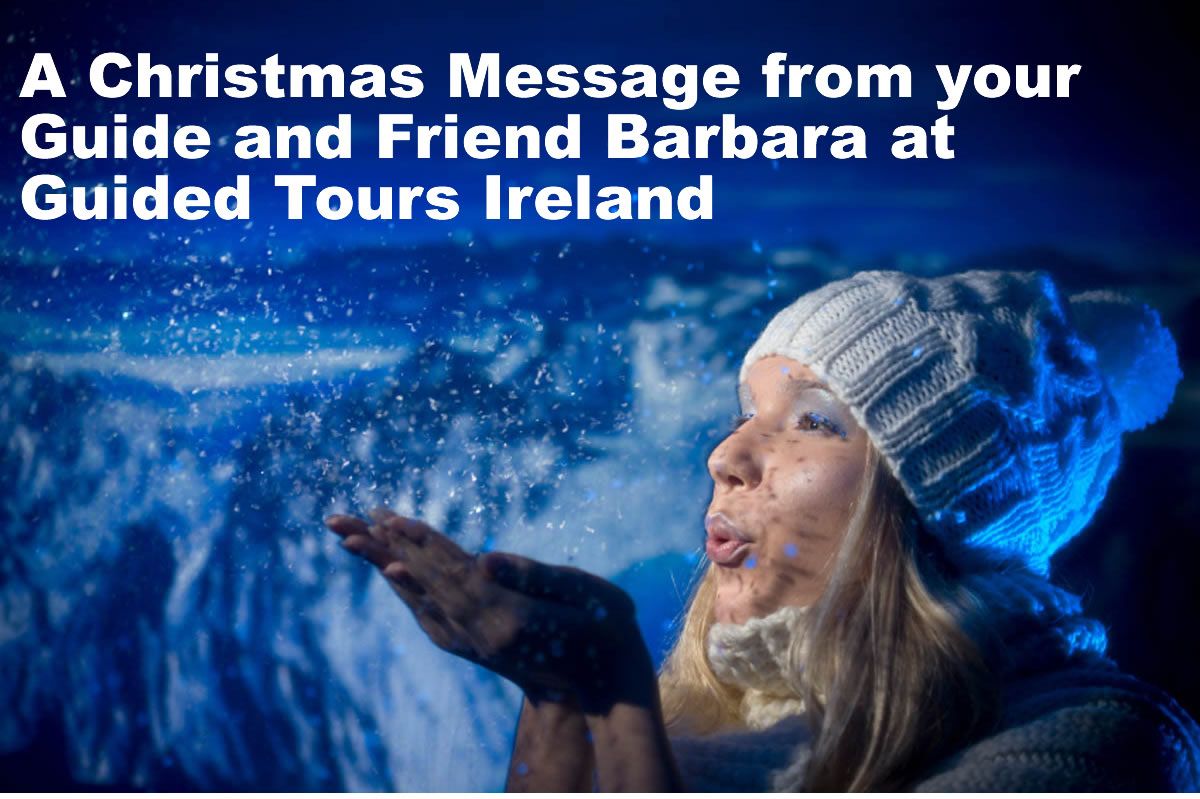 Travel memories make us smile. 2020 didn’t create many good memories but earlier years prompted great memories for me. The travellers with whom I stomped over the Giant’s Causeway Stones and puffed back up that steep walk to the Centre. The personal tours through the less well known areas of Northern Ireland into twisty long lanes in search of old townlands, old homesteads and graveyards.

Open and Ready to Tour Using My Audio Guide System My own personal handsfree Audio Guide System provides me as your group Tourist Guide the opportunity to draw in the tour group from the noisy environment and gently explain the sites we are exploring. 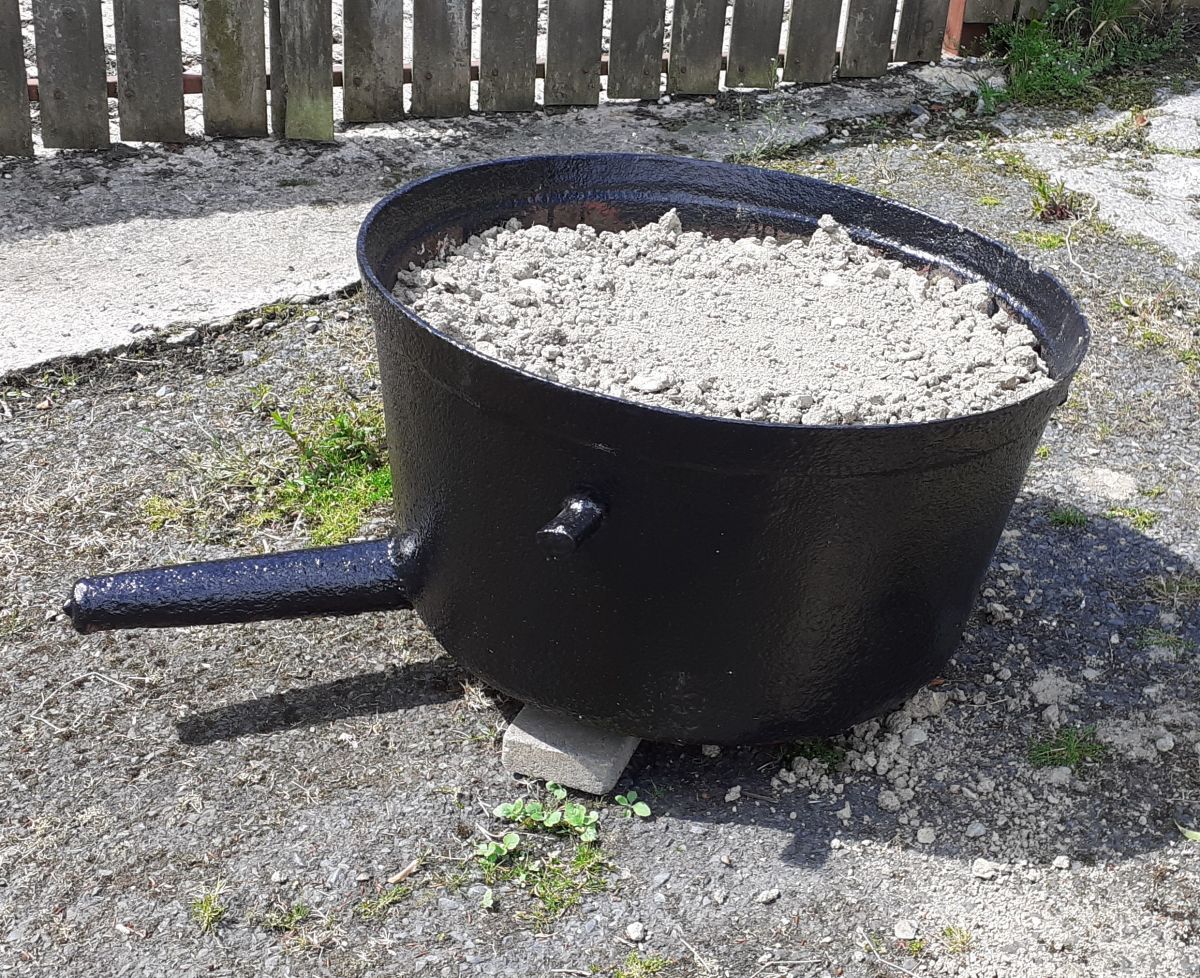 The humble famine pots sole purpose was to feed the starving population of Ireland in the packed workhouses and in temporary soup kitchens that had been set up across the country.

Hello All, how’s about you?, dreaming of travelling again?, need reassurance? 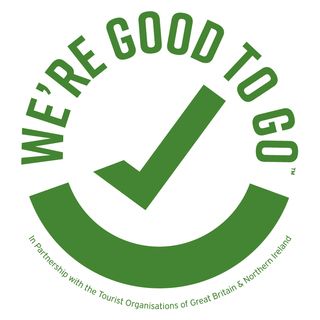 Well it is 20.30 pm Monday evening 8 th June 2020 and I'm still in Covid 19 lockdown. I have just returned from my usual evening walk. A walk that takes me up an old lane that runs to the back fields on our farm here – a lane that once lead to someone's home. What does a local Tourist Guide do on Lockdown

Your Travel Tips for Northern Ireland 2021 As a Local Northern Ireland Guide I have been planning and guiding visitors around for a over 15 years. I was excited to see Northern Ireland vibrant with tourists in 2019 and enquiries for 2020 rolling in fast. Then “bang” Corvid 19 hit and lockdown came along in early March 2020.

I will return | Fill your heart with Ireland

Take a moment to enjoy some poetic beauty. A little inspiration from afar is what we all need during these times. So sit back, relax, and #FillYourHeartWithIreland. #DreamNowTravelLater
Tweet 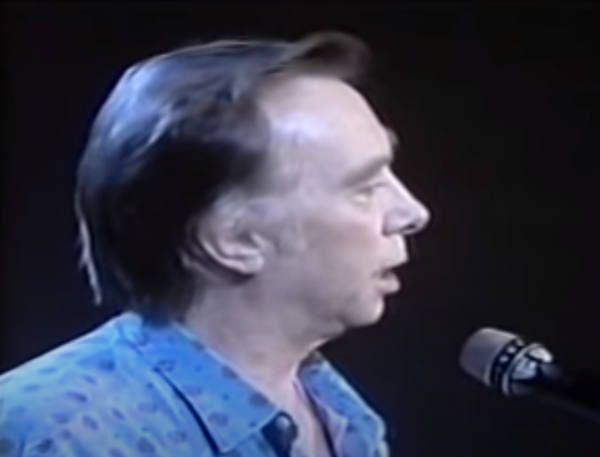 “In That Land”
“Come with me and I’ll take you to the land of my fathers,
Where wild heather mountains look out at the sea.
You will find hearts as kind as the soft winds of summer,
And a warm welcome waiting for you and for me”.
Tommy Makem 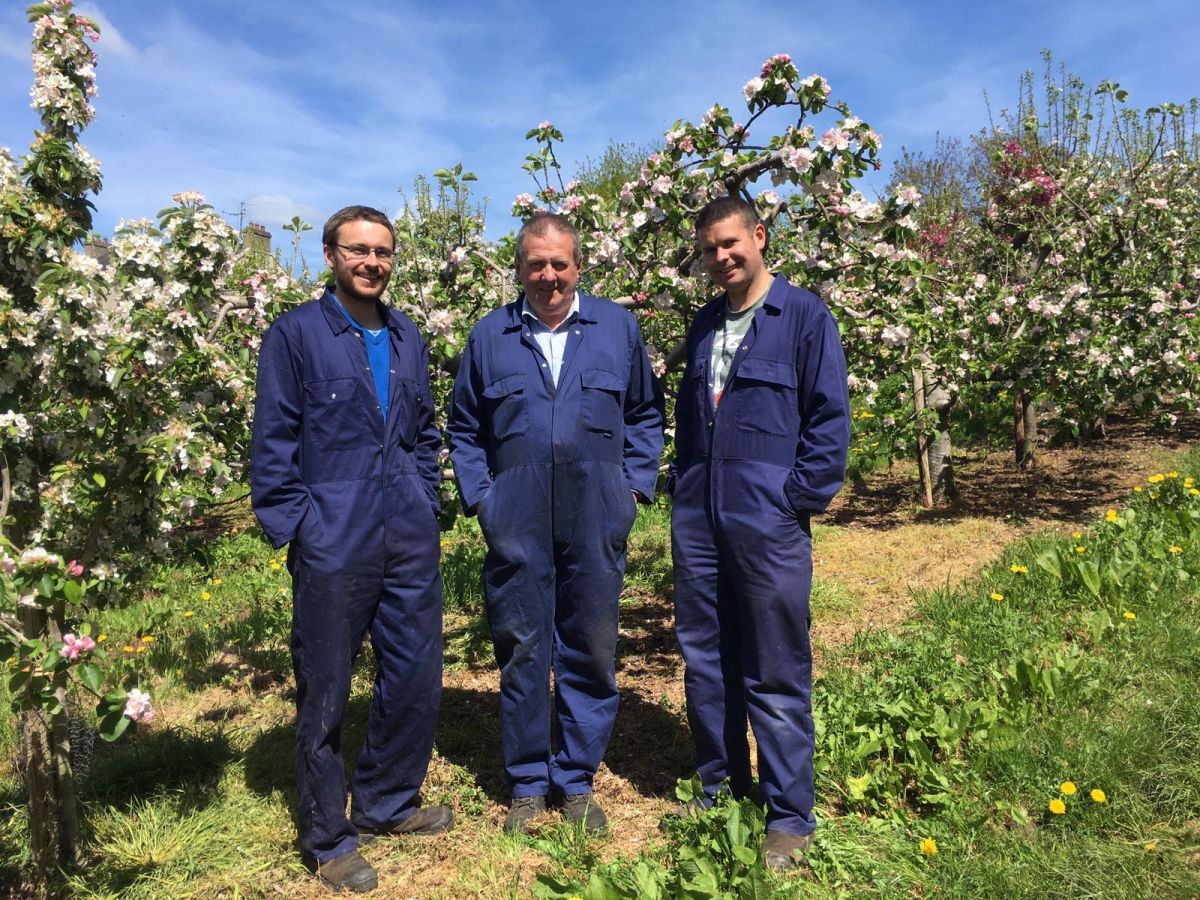 It’s May Day holiday week 2020 and the weather is fantastic. Certainly, the weather for blossom and beauty. As a local Tour Guide my career started right here on my doorstep in the middle of rural North Armagh in the orchards around the pretty plantation village of Loughgall.

Growing up on a small mixed family farm in this area with orchards right outside my bedroom window this was my local scenery. Family day trips to the mountains and the seaside in the summer months were an introduction to the beauty of the coast and the tranquillity of our sweeping mountain ranges.

Through the eyes of the tourist I rapidly became aware of how our tender caring lifestyle and our soft rolling landscape was something soon to be adored by all the world! 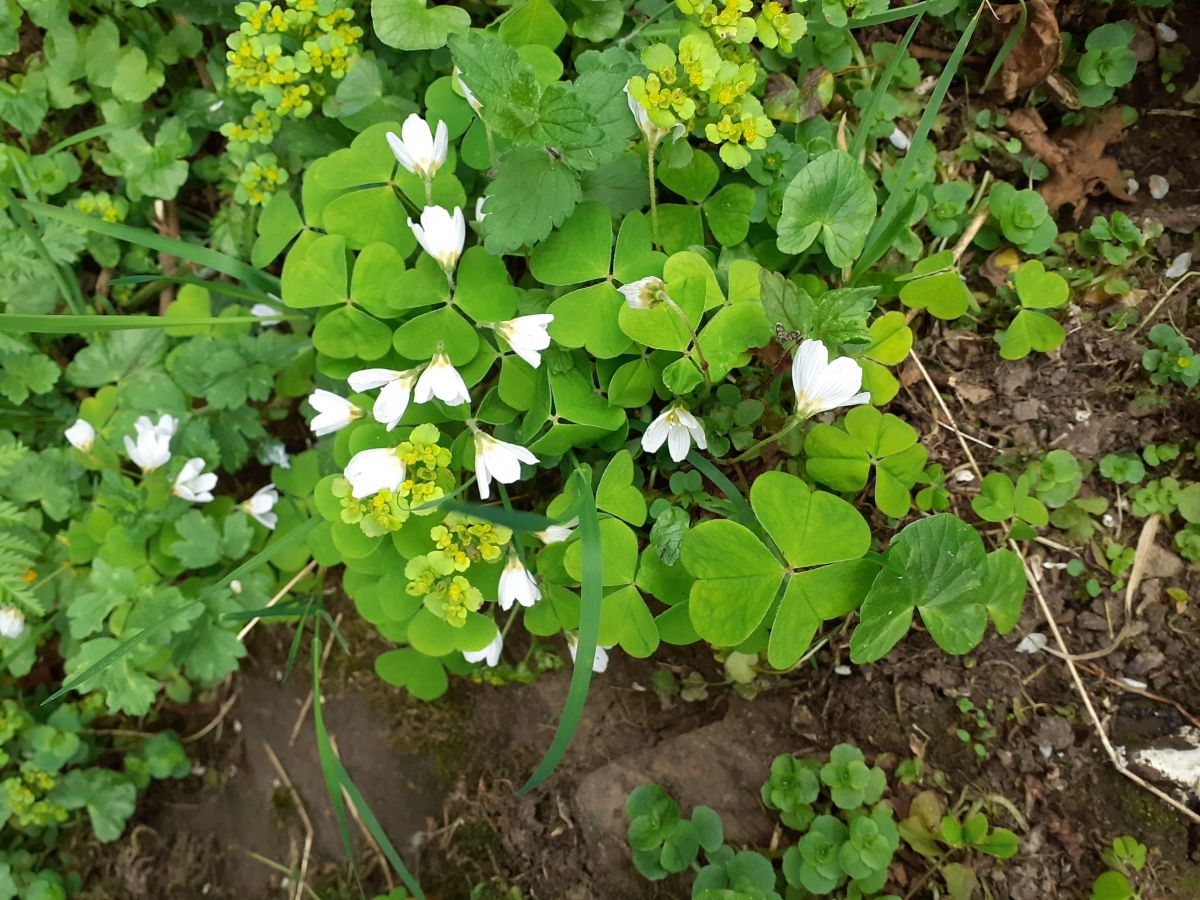 Mayday marks the beginning of Summer.

Folk believed tradition of driving herds of cows between two bonfires to purify the herd and also bring luck.

May flowers such as primroses, gorse or hawthorn blossom were gathered before dawn and placed in bundles on door posts to ward of evil.

A Message From Barbara during the Covid-19 Emergency

Hopefully see everybody in 2021